BIG One Hander is the Ultimate guide to perfecting your one hand topspin backhand, one hand slice backhand and return of serve.

The coupon code you entered is expired or invalid, but the course is still available!

BIG One hander is the culmination of 4 years of extensive research on the best players in the world. In this course you're going to get access to exclusive pro data on stances, contact heights, movement patterns and more. In addition to that, BIG One hander covers the technical checkpoints for the one hand topspin backhand, slice backhand and the topspin and slice return of serves. This is the most comprehensive one hand backhand course ever made. If you want to improve your one hand backhand you've come to the right place. BIG One hander contains exclusive information that you can't get anywhere else in the world. Level up your game now! 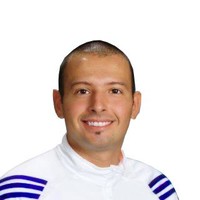 Jason has been teaching the game of tennis for the last 20 years and has spent the last 10 years specializing in performance analysis. He started working as a performance analyst for the United States Tennis Association, the governing body of tennis for the United States in 2014. In that role, Jason worked with over fifty ATP/WTA tour players, ITF juniors, and nationally ranked players on their technique and tactics. With Jason’s direct input, those players made necessary technique and tactical changes that helped improve their games.

His most recent work on the top male and female players in the world was completed after four years of intensive research. The research project and it’s ideas are the first of their kind, and promise to change how the game is played at every level. The research has led to multiple courses on pro shot selection, tactics, and court position that have led to breakthroughs in understanding how pros really play. Those courses have now been released exclusively here on TennisUnleashed.net. He has a Bachelor of Science Degree in Information Technology and a Master of Science Degree in Recreation, Sport, and Tourism Management from the University of Illinois at Urbana-Champaign.

When does the course start and finish?
The course starts now and never ends! It is a completely self-paced online course - you decide when you start and when you finish.
How long do I have access to the course?
How does lifetime access sound? After enrolling, you have unlimited access to this course for as long as you like - across any and all devices you own.
What if I am unhappy with the course?
We would never want you to be unhappy! If you are unsatisfied with your purchase, contact us in the first 30 days and we will give you a full refund.
off original price!

The coupon code you entered is expired or invalid, but the course is still available!